The Smart Service Discovery and Composition tool enables the automation of BPaaS allocation which is currently manually performed by the BPaaS broker. The BPaaS broker is currently faced with a two faced problem: (a) how to discover those services which are able to either realise the functionality of the BPaaS workflow service tasks or support the execution of the internal software components of these tasks; (b) how to select the best alternative from the service candidates of each task such that the user requirements at both the global and local level are optimised.

Concerning the first problem, the current state-of-the-art focuses on providing solutions on just one aspect, either the functional or the non-functional one. In many cases, the respective techniques do not exploit the service semantics. In addition, the alignment of QoS terms is usually not considered in non-functional service matchmaking. These two issues lead to low precision and recall in the service discovery process. Moreover, the execution time and the scalability of the respective discovery algorithms are usually not satisfactory due to the non-exploitation of smart techniques which attempt to cleverly organise the service advertisement space.

As far as the second problem is concerned, we need first to explicate that the service selection problem in BPaaS allocation is usually harder with respect to the selection of SaaS or IaaS services. This is due to the fact that both IaaS and SaaS selection are inter-dependent on each other. This means that the selection of an IaaS service can have an effect on the QoS at the SaaS level which can then influence the service selection at this latter level. As such, there is a need for an approach which is able to select both IaaS and SaaS services in conjunction by still taking into account all types of user requirements. Such an approach should also cater for the case where there are choices to be made even for the same service task in terms of selecting either an external SaaS to realise its functionality or an IaaS to support the execution of an internal software component (either owned or outsourced by the broker) that realises the functionality of this task.

Secondly, by focusing on individual level service selection, the proposed approaches usually exhibit various issues which include the following: (a) the dependencies between the different QoS terms are not considered; (b) pessimistic or average approach over service graph and available solution space is employed; (c) just a single value and not ranges of QoS values are considered to cater for the suitable service description in dynamic environments; (d) no solution is returned for over-constrained user requirements.

The Smart Service Discovery and Composition tool enables both the semantic discovery of cloud services at different levels of abstraction as well as the concurrent selection of both SaaS & IaaS services for service-based workflow concretisation according to the broker functional and non-functional requirements.

The tool actually comprises two main modules dedicated to cloud service discovery and selection, respectively. As such, the respective feature presentation is done per each main module of this tool.

Concerning service discovery, the main features of the blueprint can be summarised as follows:

As far as service selection is concerned, the respective module exhibits the following features:

This architecture of this tool, depicted in the following figure, includes three main levels: UI, business logic and database, while it certainly embraces service-orientation. It comprises the following components at the highest level:

The architecture of the Service Discovery Module is depicted in the following figure. As it can be seen, the Specification Processor is the component which takes the user/broker input and attempts to validate it both syntactically, semantically as well as in a constraint-based manner. Once user input is validated, its non-functional part is also aligned according to a specific non-functional alignment algorithm operating over a (non-functional) term store. Both the aligned non-functional specification and the functional one are passed to the Compositor which then issues them to the respective aspect-specific matchmakers, which are named as Functional Matchmaking Module and NonFunctional Matchmaking Module. Depending on the type of functionality requested, different actions are actually performed. In case of service registration / updating / deletion, the corresponding matchmaker performs the required update and then informs the Compositor for its main result. For service registration and deletion, transactionality is guaranteed by the latter component. This means that if for some reason, an aspect-specific registration / deletion fails, then the other aspect-specific registration is also rolled back to maintain a consistent state in the whole system. To assist in transactionality enforcement, a Combined Registry can be consulted and managed by the Compositor which enables storing the mappings between functional and non-functional specifications of services. 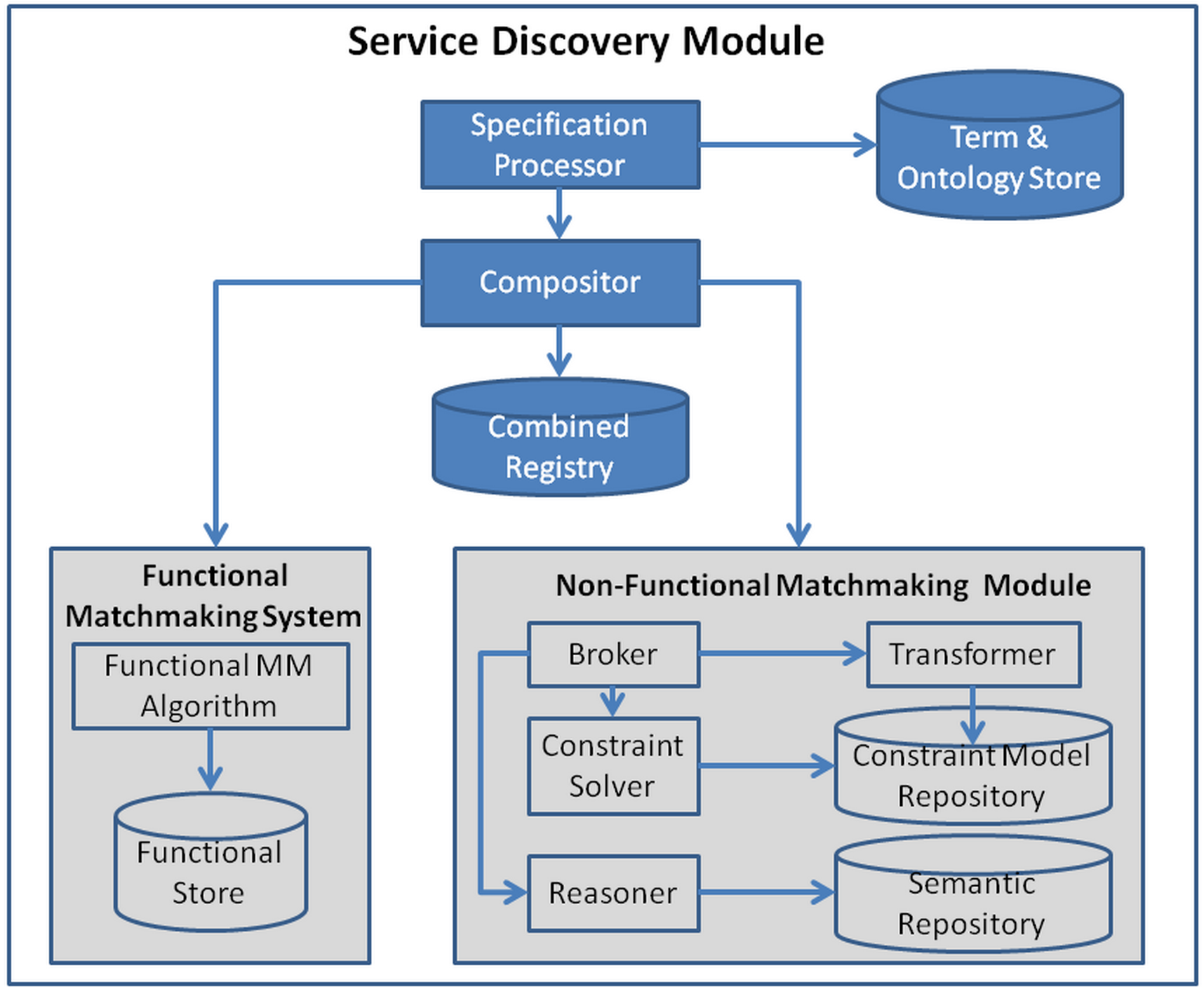 In case of service matchmaking, the Compositor realises the service discovery's composition logic by being able to execute different orchestration algorithms, such as sequential and parallel ones. In any case, the facilities of the respective matchmaking modules are exploited in order to support the required aspect-specific discovery functionality. Once both aspect-specific discovery results are obtained, then these are relayed back from the Compositor to the Specification Processor.

The Functional Matchmaking Module is a slight modification of the service matchmaker that has been developed in the Alive European project. Apart from being semantic, this matchmaker employs a smart structure and respective dynamic encoding scheme for domain ontologies that enables discovering concept ancestors or descendants in O(1) time, thus greatly speeding up the functional service matchmaking time where such ontology-based functions are highly needed and used. For simplification reasons, the internal architecture of this module can be seen as a combination of two main components: (a) the functional matchmaking algorithm and (b) the Functional Store as the storage medium for the functional specification of services.

The Service Selection Module follows a simplified architecture, depicted in the following figure, which comprises three main components: (a) the Service Selection Controller is responsible for the orchestration of the components involved in the service-based workflow concretisation. This component first invokes the Input Processor in order to construct the appropriate input for the actual optimisation problem construction. This means that based on the respective semantically-annotated service-based BPaaS workflow, the Input Processor performs service discovery for all the tasks involved according to both task-based functional and non-functional broker requirements provided in the form of annotations. This also means that this component takes into account the BPaaS CAMEL model in order to discover those IaaS offerings which satisfy the respective requirements posed for the BPaaS internal service components. Once all input has been gathered and extended, the Service Selection Controller invokes the Optimisation Problem Constructor with it in order to transform it into a constraint optimisation problem. The later problem is finally sent by the Service Selection Controller to the Constraint Solver for solving.