The CloudSocket Execution Environment enables managing, monitoring and adapting the execution of the BPaaS bundles generated during the allocation phase, which have been published via the Marketplace. The environment covers the whole steps of execution phase: i) deploy and configure all components required to execute the bundles, which comprise the workflow, SLA, adaptation rules, and details of the third-party services involved; ii) allow to manage the end-user's workflow instances, when a BPaaS workflow bundle has been deployed; iii) visualize the conformance levels to associated agreements and the respective monitoring data; iv) generate and manage the violations incurred as well as trigger the respective BPaaS bundle adaptation rules, allowing the environment to adapt the BPaaS instances to maintain the promised service level.

In order to support the aforementioned capabilities, the BPaaS Execution Environment comprises several components. These components are the following:

The following figure shows the detailed scheme of the CloudSocket Reference Architecture and the location of the different components. 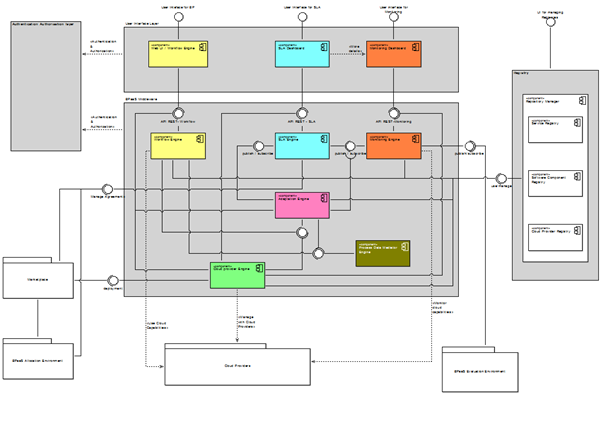 Internal architecture for the execution environment.

The architecture differentiates between two main levels: (a) one covering the components that have an interaction with the actors through a GUI, such as Web interface for the Workflow Engine, SLA dashboard and Monitoring dashboard and (b) another including the core engines to cover these functionalities. There is another hidden level, the data one which is covered internally by the internal architecture of its component but due to complexity reasons it is not shown in above figure.

The components in each level interact with each other in order to properly deliver and visualise the functionalities of the environment. More information about how these interactions are performed and what are the respective scenarios covered can be found at the following URL:

https://www.cloudsocket.eu/uml/3-ExecutionEnvironment/remotedocu/modeldocu/27012016104208/modelContentHTML in which the corresponding UML diagrams can be viewed. This information was also covered in the D4.1 deliverable. However not all components have been developed, yet. So in the following, the documentation is only available for those components, that are currently available.